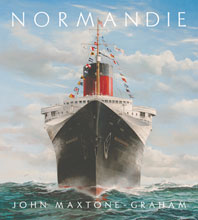 A magnificent tribute to the illustrious and ill-fated steamship.

Normandie was unquestionably the most beautiful ocean liner ever built. The world’s largest at the time, she also became the world’s fastest. Her art deco interiors were unrivaled: capacious, elegant, and chic, decorated by teams of France’s most talented artists. Yet Normandie was plagued with frustrations—never attracting more passengers than the competition and tragically ending her days in flames at New York’s Pier 88. Celebrated maritime historian John Maxtone-Graham confesses to a hypnotic fascination with Normandie. In this comprehensive volume, enriched by over 200 photographs and illustrations, he documents every aspect of the vessel’s decorative antecedents, design, construction, and service. Always articulate, entertaining, and devastatingly well informed, Maxtone-Graham has created the definitive Normandie panegyric, a comprehensive and, at times, heartbreaking account of this fabled liner.