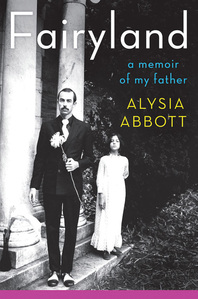 A beautiful, vibrant memoir about growing up motherless in 1970s and ’80s San Francisco with an openly gay father.

After his wife dies in a car accident, bisexual writer and activist Steve Abbott moves with his two-year-old daughter to San Francisco. There they discover a city in the midst of revolution, bustling with gay men in search of liberation—few of whom are raising a child.

Steve throws himself into San Francisco’s vibrant cultural scene. He takes Alysia to raucous parties, pushes her in front of the microphone at poetry readings, and introduces her to a world of artists, thinkers, and writers. But the pair live like nomads, moving from apartment to apartment, with a revolving cast of roommates and little structure. As a child Alysia views her father as a loving playmate who can transform the ordinary into magic, but as she gets older Alysia wants more than anything to fit in. The world, she learns, is hostile to difference.

In Alysia’s teens, Steve’s friends—several of whom she has befriended—fall ill as AIDS starts its rampage through their community. While Alysia is studying in New York and then in France, her father tells her it’s time to come home; he’s sick with AIDS. Alysia must choose whether to take on the responsibility of caring for her father or continue the independent life she has worked so hard to create.

Reconstructing their life together from a remarkable cache of her father’s journals, letters, and writings, Alysia Abbott gives us an unforgettable portrait of a tumultuous, historic time in San Francisco as well as an exquisitely moving account of a father’s legacy and a daughter’s love.

"Fairyland is [a] daughter's compassionate, clear-eyed reckoning with [the] truths that defined her singular girlhood at the dawn of the gay liberation movement." — Alexandra Styron, New York Times Book Review

"In Alysia Abbott’s gorgeous account of her 1980s San Francisco childhood, a whimsical gay poet becomes an intelligent father, his motherless daughter a forceful and articulate young woman, and a rich, dizzy fairyland is shuttered by a plague. As a chronicle of the moment when the San Francisco of Armistad Maupin became the city of Harvey Milk, when gay and experimental poetry flourished in California, Fairyland is vivid and indelible. As the portrait of a conspiracy of love between a father and a daughter, it is heartrending, a brilliant addition to the literature of American memoir." — Honor Moore, Author of The Bishop’s Daughter

"The striking photo on the cover of Fairyland looks like it could have been taken one hundred years ago. It gives a sense of the otherworldly childhood that Abbott recounts in this memoir about growing up with her openly gay, single father in San Francisco in the nineteen-seventies and eighties. The memoir doubles as a portrait of a city and a community at a crucial point in history. Her memoir is funny, strange, and sweet— she remembers playing dress-up with her father's flamboyant friends, learning about sex and gender without a mother, being immersed in art and creativity and, finally, watching as the AIDS epidemic decimated the life she knew." — New Yorker

"A vivid, sensitively written account of a complex but always loving relationship. This is not only a painfully honest autobiography but also a tribute to old-fashioned bohemian values in a world that is increasingly conformist and materialistic. I couldn't put it down!" — Edmund White, author of A Boy's Own Story

"Generous, precise, and deeply moving, Fairyland is a love story that not only brings a new generational perspective to a history we’re in danger of forgetting, but irrevocably shifts the way we think about family itself." — Alison Bechdel, author of Are You My Mother?

"At once a father-daughter love story, a testament to survival, a meditation on profound loss, and a searing chronicle of a complex coming of age, Fairyland is a beautiful, haunting book that instructs, even as it breaks our hearts." — Dani Shapiro, author of Devotion: A Memoir

"Clear-eyed and heartrending, Fairyland captures a singular time and place in American history. It also captures something much more important: what it means to be truly loved—and to love truly. A beautiful book." — Andrew McCarthy, author of The Longest Way Home

"Insightful and well-crafted, this book is useful both as a memoir and as a historical portrait of one of America's oldest gay communities." — Library Journal

"Alysia beautifully remembers the innocence of the age between the disappearance of the Beats and the onset of AIDS." — San Francisco Chronicle

"Starred review. She writes up to a standard that would do any writer-parent proud. If there's plenty of emotion in her recollections, they lack all sentimentality, sensationalism, and special pleading. Like Ira Wagner's, Growing Up Amish (2011), a tale of another radically different, unusual upbringing, Fairyland is written in shiningly clear, precise prose that gives it literary as well as testimonial distinction." — Booklist

"What makes this story especially successful is the meticulous way the author uses letters and her father’s cartoons and journals to reconstruct the world she and her father inhabited. As she depicts the dynamics of a unique, occasionally fraught, gay parent–straight child relationship, Abbott offers unforgettable glimpses into a community that has since left an indelible mark on both the literary and social histories of one of America’s most colorful cities. A sympathetic and deeply moving story." — Kirkus Reviews

"Beautifully written… a powerful portrait of a love between a father and his daughter, but also of San Francisco in the 1970s and ‘80s and the power of community, art, and love in the face of discrimination and death." — Kasia Hopkins, News Gazette

"I love the book Fairyland; it's a sweet and unique love story." — Sofia Coppola