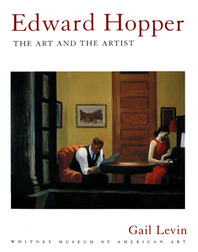 This sumptuous book presents the full range of Edward Hopper's work and offers greater access to Edward Hopper, the man, than any other single volume.

Hopper is generally considered the major twentieth-century realist. Such paintings as House by the Railroad, Early Sunday Morning, and Nighthawks seem to embody the very character of our time. Yet few people have penetrated the mask of Hopper's public image. Here, Gail Levin has gone beyond the standard evaluations of the man and his work to investigate the authentic identity of the artist and the way his personality informed his art. She has uncovered aspects of Hopper's life (and even unknown works) that provide the first comprehensive view of the artists early development. The fascinating and often poignant story of Hopper's long struggle for recognition gives new insight into his later pessimism. A complex man is revealed, introspective and intellectual, yet romantic, illuminating the many levels of meaning in the paintings of his maturity.

In addition to Hopper's watercolors and oil paintings, there are study drawings for his major works and documentary photographs illuminating all phases of his life.