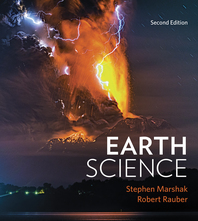 The best text for helping students see the world around them through a scientist’s eyes.

Whether hiking along a mountain trail, driving down a highway or making a decision about their energy usage, instructors want their students to see and assess the physical world they live in with more informed eyes. Through the most contemporary and applied text; the most vibrant visuals and the most hands-on learning resources, Earth Science, Second Edition gets students leaving the class with a richer understanding of the science behind the physical world around them and why it matters in their everyday lives.