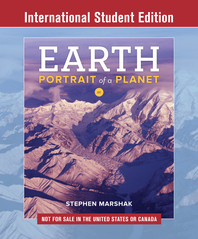 The most dynamic, hands-on introduction to physical geology.

The sixth edition of this bestselling textbook features stunning art, the most up-to-date science and a wealth of online learning tools, all developed under the critical eyes of Stephen Marshak. Heavily revised with remarkably detailed photographs, animations and maps, the text offers rich and engaging pedagogy, an expanded chapter on energy, and coverage of recent global events.