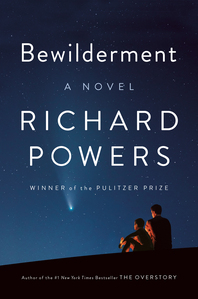 A heart-rending new novel from the Pulitzer Prize-winning and The New York Times bestselling author of The Overstory.

Robbie is a 9-year old boy with Asperger's-like traits, a precocious intelligence, a prodigious memory and exquisitely tuned to loss. A gifted young artist, he aims to draw all of the animals in danger of extinction. His father, Theo, is an astrobiologist, consumed with finding signs of life in the cosmos and raising Robbie alone after the tragic death of his wife, Aly. As Robbie's behaviour grows more unmanageable, Theo seeks out an experimental treatment conducted by Dr Martin Currier involving neurofeedback that enables Robbie to pattern his emotional responses on the recorded brainwave activity of his late mother. But as government funding is pulled from the study, Robbie suffers a precipitous decline with heart-breaking consequences. With its soaring descriptions of the natural world, tantalising vision of life beyond it and the ferocious love of a father for his young son, Bewilderment marks Richard Powers' most emotionally powerful novel to date. At its heart is the question: What is the world, at once perilous and imperilled, we've left for our children to inhabit, and can Theo save Robbie from it?

"An astrobiologist struggles to raise his unusual young son in the wake of his wife's untimely death when he hears of an experimental treatment that could change the course of the young boy's life. Searing and heartrending, guaranteed to break you and put you back together again, this latest novel from Powers seamlessly blends science, emotion and philosophy in a way that only he can." — Juliana Rose Pignataro, 20 New Books to Cozy up With This Fall, Newsweek

"My next selection is from one of our country’s greatest living writers, Richard Powers, who writes some of the most beautiful sentences I’ve ever read." — Oprah’s Book Club, October selection, announced September 28, Oprah Daily

"Powers’s new book is “Bewilderment.” You could think of it as ‘The Innerstory’: It is about how and whether we see the world we inhabit. It’s about the nature and limits of our empathy. It’s about refusing to die before we’re dead and taking seriously the gifts and responsibilities of being alive. It is about how we change our minds and how we change our societies. It is about how we treat delusion as normal and clarity as lunacy. It is enchanting, and it is devastating." — Ezra Klein Show, Podcast, The New York Times

"Powers’s insightful, often poetic prose draws us at once more deeply toward the infinitude of the imagination and more vigorously toward the urgencies of the real and familiar stakes rattling our persons and our planet." — Tracy K. Smith, The New York Times Book Review

"... while there’s a growing canon of fiction that explores the impact of extreme weather on humanity, Powers is proposing something more radical: He wants to challenge our innate anthropocentrism, both in literature and how we live." — Feature interview by Alexandra Alter, The New York Times

"[P]oignant…Bewilderment is a cri de coeur... this is a hauntingly intimate story set within the privacy of one family trapped in the penumbra of mourning." — Ron Charles, The Washington Post

"Remarkable...Bewilderment channels both the cosmic sublime and that of the vast American outdoors, resting confidently in a lineage with Thoreau and Whitman, Dillard and Kerouac." — Rob Doyle, The Guardian

"Powers succeeds in engaging both head and heart. And through its central story of bereavement, this novel of parenting and the environment becomes a multifaceted exploration of mortality." — The Economist

"Sorrowing awe is Bewilderment’s primary tone, and its many remarkable scenes are controlled with high novelistic intelligence." — The Guardian

"One of America’s most ambitious and imaginative novelists... In a year of unprecedented worldwide drought, fire, and flooding, [Bewilderment] couldn’t be timelier... Whether concerning family or nature, this heart-rending tale warns us to take nothing for granted." — Alexander C. Kafka, The Boston Globe