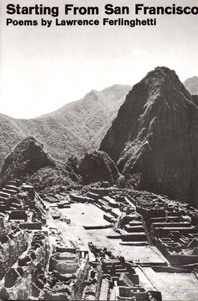 Starting From San Francisco, first published in 1961, is the third collection of Lawrence Ferlinghetti’s poetry.

The long poems of Starting From San Francisco present a new, quieter, more profound aspect of the poet. His original lyricism and caustic humor have been confronted, as it were, with the real presence of evil and death. "Starting from Paumanok... I strike up for a New World" wrote Walt Whitman in 1860. Starting from San Francisco, a hundred years later, Ferlinghetti roved back across the country (this "cradle we rocked out of") then turned south of the border to visionary conclusions in that lost horizon symbolized by Machu Picchu, the Inca city the Spaniards never found. These poems of voyage are autobiographical in that they grew out of Ferlinghetti’s travels in South America and Europe, but there are also poems on other themes, including several long "broadsides," which the author identifies as "satirical tirades––poetry admittedly corrupted by the political, itself irradiated by the Thing it attacks." Commenting on this paperbook edition, to which two important poems, "Berlin" and "The Situation in The West" have been added, Ferlinghetti wrote: "These poems represent to me a kind of halfway house in the ascent of a mountain I hardly knew existed until I stopped and looked back at the flatlands below. Like a Zen fool lost in the woods who laughs and lies face down on the earth to find his way."