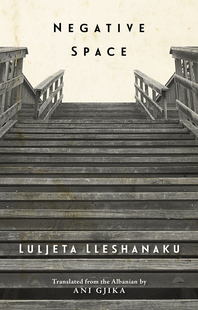 Lleshanaku’s poems are “full of objects and souls, transformed and given wings in Chagall-like metaphor” (Sasha Dugdale, Poetry Nation Review)

“Language arrived fragmentary / split in syllables / spasmodic / like code in times of war,” writes Luljeta Lleshanaku in the title poem to her powerful new collection Negative Space. In these lines, personal biography disperses into the history of an entire generation that grew up under the oppressive dictatorship of the poet’s native Albania. For Lleshanaku, the “unsaid, gestures” make up the negative space that “gives form to the woods / and to the mad woman—the silhouette of goddess Athena / wearing a pair of flip-flops / and an owl on top of a shoulder.” It is the negative space “that sketched my onomatopoeic profile / of body and shadow in an accidental encounter.” Lleshanaku instills ordinary objects and places—gloves, used books, acupuncture needles, small-town train stations—with subtle humor and profound insight, as a child discovering a world in a grain of sand.

"Twilit melancholy suffuses her Albania, where ‘Soft rain falls like apostrophes in a conversation between two worlds,’ family trees are ‘struck down by a bolt of lightning,’ and most days echo with ‘a gray metallic loneliness.’ These details coalesce to paint the Albania of her internal exile and, in the end, we feel blessed that Ms. Lleshanaku has invited us to ‘the takeoffs and landings / on the runway of her soul.’" — Dana Jennings

"Hers are certainly poems about history, politics, and power. But Lleshanaku is also original. When she turns her attention to love, the sense of human fate is unsparing. The tyrant’s insistence that there is no private realm has the unintended effect of making it necessary to write powerful and durable poems." — Sean O’Brien, The Guardian