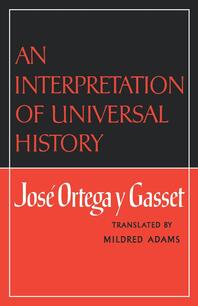 Ortega traces the course of Western civilization backward, searching out what makes a civilization rise or fall and offering a way of looking at our own time. Based on a series of lectures on A. J. Toynbee's A Study of History.

The prospectus that announced the creation of The Institute of the Humanities promised an inaugural course of twelve lectures, to be given by its founder and entitled, “Concerning a New Interpretation of International History. (Exposition and Examination of A. J. Toynbee’s work, A Study of History.)” But the course as given (in 1948-49) went much farther than that announcement, for the “examination” consisted principally of a critique of Toynbee’s work from the point of view of Ortega’s own doctrines, together with the unfolding of his personal ideas about the science of history and the progress of peoples—in particular the Romans—with frequent side excursions, meant to be systematic, into the crisis of the present time. The central theme of these pages becomes “the analysis of life established in illegitimacy . . . of which the two gigantic examples are the declining days of the Roman Empire and the period in which we ourselves are living.” To the modern crisis, Ortega brings a basic analysis and a program of reform for intelligence by which contemporary life might emerge from the confusion it now suffers.