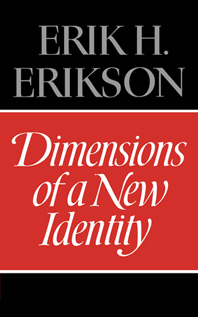 The two lectures presented in this important volume were delivered by Erik H. Erikson at the second annual Jefferson Lectures in the Humanities, sponsored by The National Endowment for the Humanitites.

In the first lecture, entitled "The Founders: Jeffersonion Action and Faith," Erikson uses selected themes from Jefferson's life to illustrate some principles of psychohistory. In the second lecture, "The Inheritors: Modern Insight and Foresight," Erikson applied his main concepts to the problems of ongoing history. The title of the lectures contains one such concept. "New identity" is the result of radical historical change and is here meant to characterize the emerging American identity as first embodied in such men as Jefferson.

Erikson first explores certain themes in his examination of the emerging American identity during Jefferson's time. He then attempts to relate the Jeffersonian themes to contemporary problems of repression and suppression, of moralistic vindication, and true liberation by insight.

Finally, Erikson maintains that now that children will be born by the privileged choice of parental persons, an adult environment fitting the living and the to-be-living becomes an ethical necessity.

There is no question that this work ranks among Erikson's most challenging and seminal books.