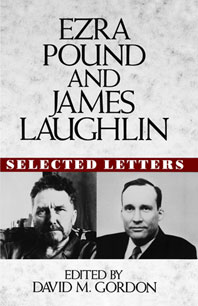 Ezra Pound and James Laughlin: Selected Letters is a modernist source book - essential reading for anyone interested in tracing the real development of twentieth-century literature.

Even before establishing "New Directions", James Laughlin had met and studied with Ezra Pound. These selected letters capture the spirit of their growing relationship from pupil and teacher to publisher and author. Pound's correspondence summons up the inner man and the literary figure. Literature, music, friends and politics fill his pages.