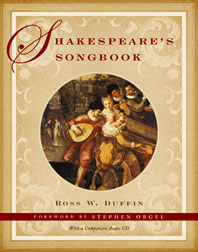 A remarkable work that recovers the songs Shakespeare's audiences actually heard and brings them to life through performance.

Winner of the Claude V. Palisca Award of the American Musicological Society

Shakespeare lovers have long lamented that so few songs in his plays survive with original music; of about sixty song lyrics, only a handful have come down to us with musical settings. For over 150 years, scholars have aspired—without success—to fill that gap. In Shakespeare's Songbook, Ross W. Duffin does just that.

Eight years in the making, Shakespeare's Songbook is a meticulously researched collection of 155 songs—ballads and narratives, drinking songs, love songs, and rounds—that appear in, are quoted in, or alluded to in Shakespeare's plays. Drawing substantially on the unmatched resources of the Folger Shakespeare Library, Duffin brings complete lyrics (many newly recovered) and music notation together for the first time, and in the process sheds new light on Shakespeare's dramatic art. With performances by leading early-music singers and instrumentalists, the accompanying audio CD brings the songbook to life. Shakespeare's Songbook is the perfect gift for lovers of Shakespeare and an invaluable reference for singers, actors, directors, and scholars.

“A wonderfully concise and informative guide to the songs and ballads. . . . The first complete collection.” — Times Literary Supplement