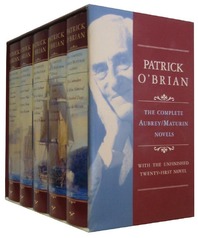 Patrick O’Brian’s twenty-one-volume Aubrey/Maturin series has delighted generations of devoted fans, inspired a blockbuster film, and sold millions of copies in twenty-four languages. These five omnibus volumes, beautifully produced and boxed, contain 7,000 pages of what has often been described as a single, continuous narrative. They are a perfect tribute for such a literary achievement, and a perfect gift for the O’Brian enthusiast.

"Like John le Carré, [O’Brian] has erased the boundary separating a debased genre from ‘serious’ fiction. O’Brian is a novelist, pure and simple, one of the best we have." — Mark Horowitz, Los Angeles Times Book Review