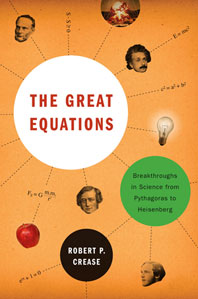 Great innovations in science and the people behind them.

Philosopher and science historian Robert P. Crease tells the stories behind ten of the greatest equations in human history. Was Nobel laureate Richard Feynman really joking when he called Maxwell's electromagnetic equations the most significant event of the nineteenth century? How did Newton's law of gravitation influence young revolutionaries? Why has Euler's formula been called "God's equation," and why did a mysterious ecoterrorist make it his calling card? What role do betrayal, insanity, and suicide play in the second law of thermodynamics?

The Great Equations tells the stories of how these equations were discovered, revealing the personal struggles of their ingenious originators. From "1 + 1 = 2" to Heisenberg's uncertainty principle, Crease locates these equations in the panoramic sweep of Western history, showing how they are as integral to their time and place of creation as are great works of art.

“[...] Any reader who aspires to be scientifically literate will find this a good starting place.” — Publishers Weekly