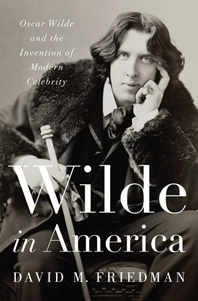 The story of Oscar Wilde's 1882 American tour explains how this quotable literary eminence became famous for being famous.

On 3 January 1882, Oscar Wilde, a twenty-seven-year-old "genius"—by his own reckoning—arrived in New York.

The Dublin-born Oxford man had made a spectacle of himself in London with his fashion sense, acerbic wit, and passion for art and design, and was hired to go to America to lecture on interior decorating. But Wilde had his own business plan: he would promote himself. And he did, creating a template for fame creation that still works today. Wilde presented himself as a "star", taking the stage in satin breeches and a velvet coat with lace trim as he sang the praises of sconces, embroidered pillows and himself. What he so presciently understood is that fame could launch a career as well as cap one.

An enchanting tale of travel and transformation, comedy and capitalism, Wilde in America teaches us about our present as well as our past.

“...impeccably-researched and absorbing chronicle...” — The Independent

“...fascinating study...Not many biographers will have sifted through the archives of the St Louis Post Dispatch for February 1882, for example, yet Friedman yields interesting facts and figures about the itinerary.” — Roger Lewis, Book of the Week, The Times

“...thoughtful and engaging…” — The Sunday Telegraph