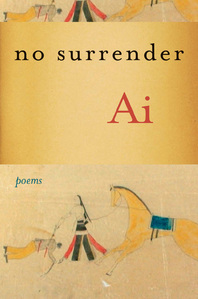 A searing new collection from a master of the poetic monologue.

A disillusioned Irish nun moves to America, meets Elvis, and rediscovers her faith. An amputee goes on a strange journey during a hurricane. Each of the speakers in Ai's daring new collection has a uniquely American story to tell, and each is told with the poet's characteristic dark humor and ambition.’

From "Brotherhood"
Now we're middle aged,
Bearing the curse, not the luck of the Irish,
On our shoulders like crosses.
We know that loss is just the outcome of living,
The dross that's left after you turn gold back into iron
And end up in Rio with a mulatta, who's got a habit,
But he doesn't care. He's flying blind
And I am right behind him.