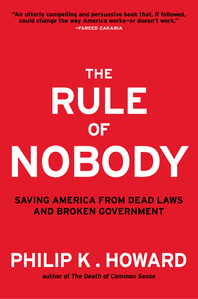 America is run by dead people—leaders from past generations who enacted programmes that churn ahead regardless of waste, irrelevance or new priorities.

What’s wrong in Washington is deeper than we think. There’s gridlock, polarisation and self-dealing but hidden underneath is something bigger and more destructive: a broken governing system. From that comes wasteful government, rising debt, failing schools, expensive health care and economic hardship. Rules have replaced leadership.

This explosive manifesto argues that to get America moving again, Americans must be free to make sensible choices—to scrap obsolete laws and to approve new infrastructure projects in a year. Philip K. Howard explains what went wrong in the American operating system, how to mend it and how to re-engage the American spirit to make things right again.