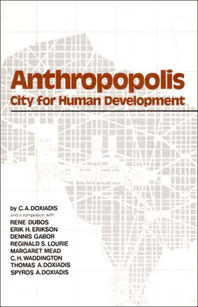 The symposium produced some important ideas which will be invaluable in the planning of more workable cities and in the reorganization of society to give citizens the maximum of community life and the maximum of diversity.

In the summer of 1972 a symposium on the City for Human Development was organized by the Athens Center of Ekistics. C. A. Doxiadis, an architect, and one of the planners of the symposium, prepared a set of goals and a proposal for discussion. His main concern was how to make the city more human, that is, how to make citizens happy and safe and help them in their human development. Doxiadis’ proposal faced this problem from the point of view of a builder of houses and cities who wishes to develop them in a responsible manner. Therefore, it was decided to bring together a few scientists interested in the fate of man who would discuss whether it was possible to create a city which would ensure man’s happiness and security and which would also help him to develop in a more satisfactory manner. This book contains Doxiadis’ report and the symposium.