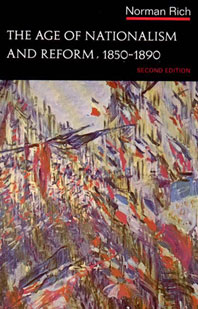 The Revolutions of 1848 swept away some of the foremost champions of international conservatism: new statesmen with new aims replaced them and dominated Europe in the latter half of the nineteenth century.

The chief sponsor of national revolutions at the beginning of the period was Napoleon III, who hoped to re-establish French ascendancy in Europe, but he was defeated by the forces of a rising and newly unified power-Germany under Bismarck. As in the first edition, Norman Rich traces the spread of nationalism across the continent. He has, however, greatly amplified his treatment of the social and intellectual consequences of industrialization, with particular emphasis on the changing demography of Europe and cultural trends at all levels of society.