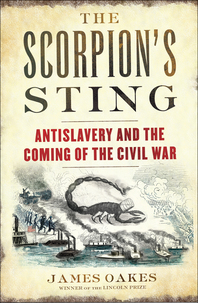 An award-winning historian illuminates the strategy for ending slavery that precipitated the crisis of civil war.

Surrounded by a ring of fire, the scorpion stings itself to death. The image, widespread among antislavery leaders before the Civil War, captures their long-standing strategy for peaceful abolition: they would surround the slave states with a cordon of freedom. They planned to use federal power wherever they could to establish freedom: the western territories, the District of Columbia, the high seas. By constricting slavery they would induce a crisis: slaves would escape in ever-greater numbers, the southern economy would falter, and finally the southern states would abolish the institution themselves. For their part the southern states fully understood this antislavery strategy. They cited it repeatedly as they adopted secession ordinances in response to Lincoln's election.

The scorpion's sting is the centerpiece of this fresh, incisive exploration of slavery and the Civil War: Was there a peaceful route to abolition? Was Lincoln late to emancipation? What role did race play in the politics of slavery? With stunning insight James Oakes moves us ever closer to a new understanding of the most momentous events in our history.