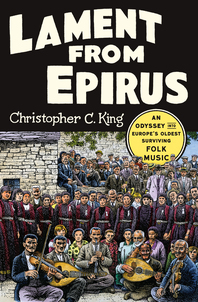 In the tradition of Patrick Leigh Fermor and Geoff Dyer, a Grammy-winning producer discovers a powerful and ancient folk music tradition.

In a dark record shop in Istanbul, Christopher King uncovered some of the strangest—and most hypnotic—sounds he had ever heard. The 78s seemed to tap into a primal well of emotion inaccessible to contemporary music. The songs, King learned, were from Epirus, an area straddling southern Albania and northwestern Greece and boasting a folk tradition extending back to the pre-Homeric era. Lament from Epirus is an unforgettable journey into a musical obsession which follows a genre back to the roots of song itself. As King hunts for traces of two long-lost virtuosos, he tells the story of the Roma people who pioneered Epirotic folk music and whose descendants continue the tradition today. His journey becomes an investigation into song and dance’s role as a means of spiritual healing—and what this may reveal about music’s original purpose.

"Christopher King’s relationship to music is passionate and profound. As a scholar and obsessive collector of 78s he has few peers. Lament from Epirus will delight anyone who has ever put the needle down on an unknown record and waited to see what would come out of the speakers." — Hari Kunzru, author of White Tears

"Anyone interested in the power of music—spiritually, culturally, historically, or politically—will find this odyssey to be transformative. By way of an anthropological detective story, Christopher King deftly reveals details and echoing connections I personally never even imagined. Fascinating." — Jim Jarmusch

"... superb book... A highly recommended read, then, for anyone interested in the music of the southern Balkans, the roots of European folk music, the aesthetics of vernacular music or the philosophy of record collecting." — Songlines

"The book is a great read in itself, but for aficionados of hardcore folk music, it's essential, grappling as it does with what might lie (perhaps deeply buried) in the heart of the music we love." — fRoots

"A passionate record collector embarks on a Greek musical odyssey in this captivating travelogue,... remarkable book... It's not a spoiler to say that King found what he was looking for, and he tells the story well." — Ed Ward, Financial Times

"Lament From Epirus is a feverish memoir of the ecstasies and traumas of a music obsessive, and a gonzo account of the deep, transporting meaning of music itself... King's book is compelling, illuminating and funny, but above all it is a deeply serious lament for the flattening and coarsening of culture by the onrush of technology, commerce and globalisation." — Wire

"Lament From Epirus is a most gripping and entertaining ethnomusicological ride. Highly recommended.
" — Rock n Reel