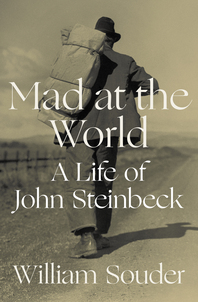 A biography of one of America’s most popular and misunderstood authors, John Steinbeck.

This first full-length biography of the Nobel Laureate to appear in a quarter century explores John Steinbeck’s long apprenticeship as a writer struggling through the depths of the Great Depression, and his rise to greatness with masterpieces such as The Red Pony , Of Mice and Men and The Grapes of Wrath . His most poignant and evocative writing emerged in his sympathy for the Okies fleeing the dust storms of the Midwest, the migrant workers toiling in California’s fields and the labourers on Cannery Row, reflecting a social engagement—paradoxical for all of his natural misanthropy—radically different from the writers of the so-called Lost Generation.

A man by turns quick-tempered, contrary, compassionate and ultimately brilliant, Steinbeck took aim at the corrosiveness of power, the perils of income inequality and the growing urgency of ecological collapse, all of which drive fierce public debate to this day.