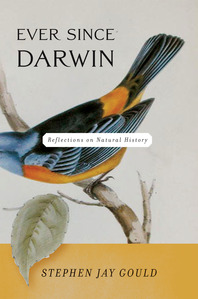 More than any other modern scientists, Stephen Jay Gould has opened up to millions the wonders of evolutionary biology. His genius as an essayist lies in his unmatched ability to use his knowledge of the world, including popular culture, to illuminate the realm of science.

Ever Since Darwin, Stephen Jay Gould's first book, has sold more than a quarter of a million copies. Like all succeeding collections by this unique writer, it brings the art of the scientific essay to unparalleled heights.

"A remarkable achievement by any measure. [Gould] is profoundly intelligent, a writer of great natural wit, and his sophistication and learning range far beyond the parameters of his academic field, biology. . . . One is hard pressed to single out past writers who could wear the sobriquet of natural history essayist with such distinction." — David Walsten, Chicago Tribune

"A shrewd and learned intellectual whose essays on Charles Darwin have the style and address of what in other circumstances might be the writing of a literary critic upon Stendhal or Proust or other such major figure in the world of letters." — P. B. Medawar, The Sciences