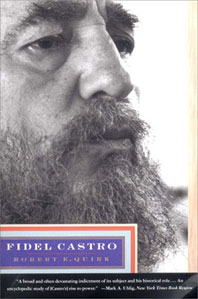 In this masterly biography, the prize-winning historian Robert E. Quirk paints a portrait of the charismatic leader who for more than three decades—and over eight American presidencies—managed to sustain a communist regime in the western hemisphere.


Fidel Castro emerges as an ambitious rebel, from his earliest years into his student years and adulthood.

In gripping detail, Quirk follows Castro as his first, failed attempt to bring down the regime of Fulgencio Batista is followed by the small-scale attacks from the Sierra Maestra mountains that culminate in the dictator's flight from Cuba in 1959 and Castro's sweep into power. The story provides a new account of Castro's relations with the United States and the Soviet Union, including the Bay of Pigs invasion and the 1962 Missile Crisis, and an analysis of the successes and failures of his regime to the present day.

In its breadth and drama, Fidel Castro is more than the story of one ambitious man steering his nation on a dangerous and doomed course. It is also a parable of a small country caught up in the throes of international rivalries and world revolution.