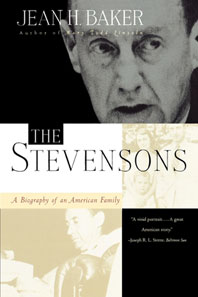 Jean H. Baker tells the compelling story of four generations of an American family and its most celebrated member, the high-minded, eloquent, and perennial also-ran icon of liberal politics, Adlai Ewing Stevenson II (1900-1965). The Stevensons is also a book about the relationship of a family to its times: With Baker's characteristically deft blend of the public and private, set on a broad canvas, the Stevenson story becomes an American saga.

“A valuable study of one of the most frustratingly elusive figures of mid-century American politics, rich in political anecdote but rigorously analytical.” — Michael Kenney, Boston Globe