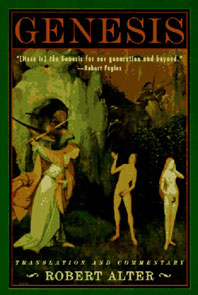 "[Here is] ?the ?Genesis for our generation and beyond."—Robert Fagles

Genesis begins with the making of heaven and earth and all life, and ends with the image of a mummy—Joseph's—in a coffin. In between come many of the primal stories in Western culture: Adam and Eve's expulsion from the garden of Eden, Cain's murder of Abel, Noah and the Flood, the destruction of Sodom and Gomorrah, Abraham's binding of Isaac, the covenant of God and Abraham, Isaac's blessing of Jacob in place of Esau, the saga of Joseph and his brothers.

In Robert Alter's brilliant translation, these stories cohere in a powerful narrative of the tortuous relations between fathers and sons, husbands and wives, eldest and younger brothers, God and his chosen people, the people of Israel and their neighbors. Alter's translation honors the meanings and literary strategies of the ancient Hebrew and conveys them in fluent English prose. It recovers a Genesis with the continuity of theme and motif of a wholly conceived and fully realized book. His insightful, fully informed commentary illuminates the book in all its dimensions.

“Here is Genesis in all its power and presence.... Alter offers us an English prose as gravely cadenced as that of the King James Bible, and yet as fresh, precise, and strong as the best contemporary narrative can be.” — Robert Fagles, award-winning translator of The Iliad and The Odyssey

“Robert Alter's new translation unquestionably should find a place on the bookshelf of every lover of Genesis and the Bible.” — Jonathan Groner, Washington Post

“Alter's achievement is immensely impressive.... The illuminating notes alone make this volume indispensable for anyone wanting to do a close reading in English translation and understand all the possibilities of the original Hebrew.” — John A. Phillips, Boston Globe

“Fluently readable.... As clear a window into primal darkness and the jeweled garden and the deeds of the patriarchs and matriarchs as we've likely to have in a long time.” — Chaim Potok, Philadelphia Inquirer Books

“Genesis remains our best single collection of perennial stories. Alter translates them glowingly, without slickness or archness. His running commentary illuminates the true language of life in both Hebrew and English.” — Roger Shattuck