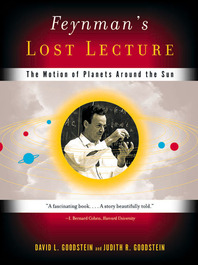 Rescued from obscurity, Feynman's Lost Lecture is a blessing for all Feynman followers. Most know Richard Feynman for the hilarious anecdotes and exploits in his best-selling books "Surely You're Joking, Mr. Feynman!" and "What Do You Care What Other People Think?" But not always obvious in those stories was his brilliance as a pure scientist—one of the century's greatest physicists. With this book and CD, we hear the voice of the great Feynman in all his ingenuity, insight, and acumen for argument. This breathtaking lecture—"The Motion of the Planets Around the Sun"—uses nothing more advanced than high-school geometry to explain why the planets orbit the sun elliptically rather than in perfect circles, and conclusively demonstrates the astonishing fact that has mystified and intrigued thinkers since Newton: Nature obeys mathematics. David and Judith Goodstein give us a beautifully written short memoir of life with Feynman, provide meticulous commentary on the lecture itself, and relate the exciting story of their effort to chase down one of Feynman's most original and scintillating lectures.