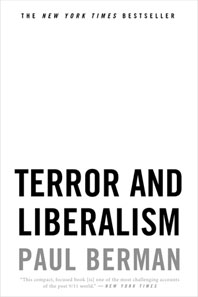 A manifesto for an aggressive liberal response to terrorist attacks.

One of our most brilliant public intellectuals, Paul Berman has spent his career writing on revolutionary movements and their totalitarian aspects. Here he argues that, in the terror war, we are not facing a battle of the West against Islam—a clash of civilizations. We are facing, instead, the same battle that tore apart Europe during most of the twentieth century, only in a new version. It is the clash of liberalism and its enemies—the battle between freedom and totalitarianism that arose in Europe many years ago and spread to the Muslim world.

The author considers the wars against fascism and communism from the past, and draws cautionary lessons. But he also draws from those past experiences a liberal program for the present—a program that departs in fundamental respects from the policies of the Bush administration.

“Breaks its bounds....As a thinker [and] as a writer, Berman begins to cast a spell.” — Bookforum

“An accomplished intellectual history....This book has insights for everyone across the political spectrum who seeks a better understanding of the present danger.” — National Review

“One of the most challenging accounts of the post-9/11 world.” — New York Times

“A compelling [and] powerful book.” — Newsletter of the Social Democrats USA

“Berman connects the dots of world fascism...Policymakers everywhere should bone up on his discoveries and take heed.” — Philadelphia Inquirer

“Berman is one of the most elegant and provacative thinkers to emerge from America's New Left.” — Salon

“An achievement...practical, yet analytical.” — The Nation

“There is much to admire in Berman's book....[a] valuable contribution.” — The New York Review

“A damning indictment of bad leftism...a smart [and] honest book that should be read.” — The Weekly Standard