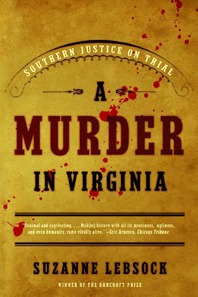 "[Makes] history, with all its messiness, ugliness, and even humanity, come vividly alive."—Chicago Tribune

It's 1895 in Virginia, and a white woman lies in her farmyard, murdered with an ax. Suspicion soon falls on a young black sawmill hand, who tries to flee the county. Captured, he implicates three women, accusing them of plotting the murder and wielding the ax. In vivid courtroom scenes, Bancroft Prize-winning historian Suzanne Lebsock recounts their dramatic trials and brings us close to women we would never otherwise know: a devout (and pregnant) mother of nine; another hard-working mother (also of nine); and her plucky, quick-tempered daughter. All claim to be innocent. With the danger of lynching high, can they get justice?

Lebsock takes us deep into this contentious, often surprising world, where blacks struggle to hold on to their post-Civil War gains against a rising tide of white privilege. A sensation in its own time, this case offers the modern reader a riveting encounter with a South in the throes of change.

"So much happens—and so much of it is unexpected—in Suzanne Lebsock's gripping study of the sensational ax murder of Lucy Jane Pollard...that we can only urge readers to read for themselves the acclaimed author's brilliant descriptions of racial politics (four African Americans were accused), the constant threat of lynching, the vicious court battles and how it all ended." — Dallas Morning News

"How refreshing! Honest-to-goodness, 100 percent-genuine facts in an age of docudramas and fictional histories....Impressive job of historical re-creation....[Lebsock] has done a service in resuscitating this forgotten tale." — New York Times