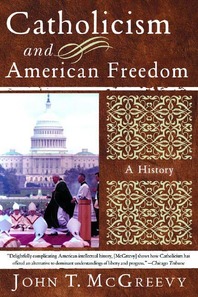 "A brilliant book, which brings historical analysis of religion in American culture to a new level of insight and importance." —New York Times Book Review

Catholicism and American Freedom is a groundbreaking historical account of the tensions (and occasional alliances) between Catholic and American understandings of a healthy society and the individual person, including dramatic conflicts over issues such as slavery, public education, economic reform, the movies, contraception, and abortion. Putting scandals in the Church and the media's response in a much larger context, this stimulating history is a model of nuanced scholarship and provocative reading.

"[McGreevy] has written the best intellectual history of the Catholic Church in America." — Neil Coughlin, Commonweal

"More than any book I have read, McGreevy's shows how constituent and various an element Catholicism, in its several strains, has been in shaping this nation." — Katherine A. Powers, Boston Sunday Globe

"Fascinating...a meditation on power and its shadow, marginality; on freedom, and its inevitable price, unfreedom." — JoAnn Wypijewski, The Nation

"A laser-like examination of the central tension between Catholicism and the American experiment. Deeply intelligent, well written, and based on wide research in original sources, this will be the standard work for a long time to come." — Charles Morris, author of American Catholic

"A masterpiece that will be read eagerly not only for its insights into Catholic history but also for its rich understanding of American history." — E. J. Dionne, Jr., author of Why Americans Hate Politics