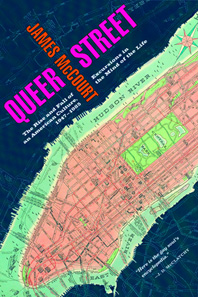 "A heroically imaginative account of gay metropolitan culture, an elegy and an apologia for a generation."—New York Times Book Review

A fierce critical intelligence animates every page of Queer Street. Its sentences are dizzying divagations. The postwar generation of queer New York has found a sophisticated bard singing 'the elders' history' (The New York Times). James McCourt's seminal Queer Street has proven unrivaled in its ability to capture the voices of a mad, bygone era. Beginning with the influx of liberated veterans into downtown New York and barreling through four decades of crisis and triumph up to the era of the floodtide of AIDS, McCourt positions his own exhilarating experience against the whirlwind history of the era. The result is a commanding and persuasive interlocking of personal, intellectual, and social history that will be read, dissected, and honored as the masterpiece it is for decades to come. A Publishers Weekly Best Book of 2003; a Lambda Award finalist.