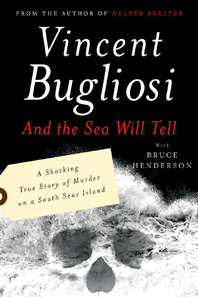 "Grips you by the throat from beginning to end."—Cleveland Plain Dealer

ALONE WITH HER NEW HUSBAND on a tiny Pacific atoll, a young woman, combing the beach, finds an odd aluminum container washed up out of the lagoon, and beside it on the sand something glitters: a gold tooth in a scorched human skull. The investigation that follows uncovers an extraordinarily complex and puzzling true-crime story. Only Vincent Bugliosi, who recounted his successful prosecution of mass murderer Charles Manson in the bestseller Helter Skelter, was able to draw together the hundreds of conflicting details of the mystery and reconstruct what really happened when four people found hell in a tropical paradise. And the Sea Will Tell reconstructs the events and subsequent trial of a riveting true murder mystery, and probes into the dark heart of a serpentine scenario of death.

"Succeeds on all accounts . . . refuses to relinquish its grip on our imaginations." — Los Angeles Times Book Review