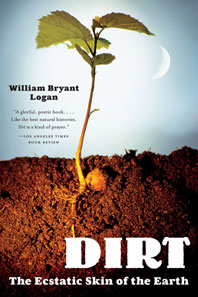 "You are about to read a lot about dirt, which no one knows very much about." So begins the cult classic that brings mystery and magic to "that stuff that won't come off your collar."

John Adams, Thomas Jefferson, Saint Phocas, Darwin, and Virgil parade through this thought-provoking work, taking their place next to the dung beetle, the compost heap, dowsing, historical farming, and the microscopic biota that till the soil. Whether William Bryant Logan is traversing the far reaches of the cosmos or plowing through our planet’s crust, his delightful, elegant, and surprisingly soulful meditations greatly enrich our concept of "dirt," that substance from which we all arise and to which we all must return.

“Logan sets out to purify dirt, to embed us so intimately in the skin of the Earth that we will live momentarily, at least, entranced by its vibrancy…This is the most literate book to bring soil to soul and soul to the subterranean.” — Peter Warshall, Whole Earth

“Read this book. You'll know more about that which you are made of and which is essential to all life on the land part of the planet than you thought imaginable.” — Wes Jackson, president and founder of the Land Institute