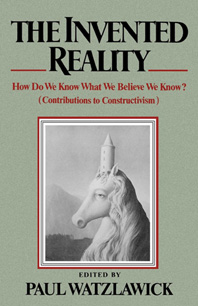 Common sense suggests that reality can be discovered. In contrast, constructivism postulates that what we call reality is a personal interpretation, a particular way of looking at the world acquired through communication. Reality is, therefore, not discovered, but literally invented.

This book examines how individual, social, scientific, and ideological "realities" are constructed, after which we naively assume they are the "real" realities. Contributors include Ernst von Glaserfeld (known for his cognitive studies with chimpanzees); cybeneticist Heinz von Foerster; David L. Rosenhan (author of On Being Sane in Insane Places); microbiologist Francisco J. Varela; and Gabriel Stolzenberg, professor of mathematics at Northeastern University. Paul Watzlawick has contributed commentary, an introduction and an epilogue, and two of the ten essays.

For educated readers, this is the first multidisciplinary presentation of a subject of vital importance to the way we think and live.