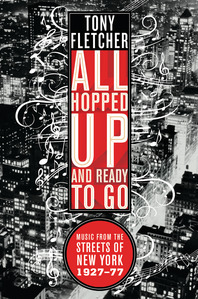 A penetrating and entertaining exploration of New York’s music scene from Cubop through folk, punk, and hip-hop.

From Tony Fletcher, the acclaimed biographer of Keith Moon, comes an incisive history of New York’s seminal music scenes and their vast contributions to our culture. Fletcher paints a vibrant picture of mid-twentieth-century New York and the ways in which its indigenous art, theater, literature, and political movements converged to create such unique music.

With great attention to the colorful characters behind the sounds, from trumpet player Dizzy Gillespie to Tito Puente, Bob Dylan, and the Ramones, he takes us through bebop, the Latin music scene, the folk revival, glitter music, disco, punk, and hip-hop as they emerged from the neighborhood streets of Harlem, the East and West Village, Brooklyn, the Bronx, and Queens. All the while, Fletcher goes well beyond the history of the music to explain just what it was about these distinctive New York sounds that took the entire nation by storm.

"In his richly detailed study of fifty years of the city’s most important musical history, music journalist Fletcher vividly recreates the birth and evolution of jazz, folk, pop, punk and hip-hop as the strains of these urban styles emerged from the urban cacophony of New York." — Publishers Weekly

"Fletcher’s commentary melds very different cultures to shows interrelationships and how new genres built upon the foundations of predecessors... Anyone interested in popular music and the rich cultural heritage of New York—indeed, of all of the U.S.—should read this book." — Booklist

"Like Alastair Cooke’s America, All Hopped Up is an unapologetically opinionated overview of zeitgeists that sparked their own theme music.... An indispensable reference book for college students and a survival guide for modern musicians." — Chronogram

"In All Hopped Up and Ready To Go: Music from the Streets of New York 1927-77, Tony Fletcher has demonstrated extraordinary depth in his research and vibrancy in his writing. Not only was I fascinated by his stories of times and styles about which I knew little, but, in those areas in which I knew a lot, he has connected all the dots for me…oh, yeah, and it’s a damned good read." — Mike Stoller