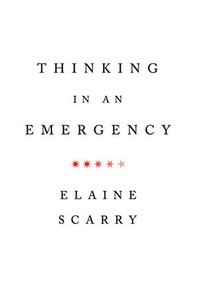 Award-winning critic Elaine Scarry provides a vital new assessment of leadership during crisis that ensures the protection of democratic values.

In Thinking in an Emergency, Elaine Scarry lays bare the realities of “emergency” politics and emphasizes what she sees as the ultimate ethical concern: “equality of survival.” She reveals how regular citizens can reclaim the power to protect one another and our democratic principles. Government leaders sometimes argue that the need for swift national action means there is no time for the population to think, deliberate, or debate. But Scarry shows that clear thinking and rapid action are not in opposition. Examining regions as diverse as Japan, Switzerland, Ethiopia, and Canada, Scarry identifies forms of emergency assistance that represent “thinking” at its most rigorous and remarkable. She draws on the work of philosophers, scientists, and artists to remind us of our ability to assist one another, whether we are called upon to perform acts of rescue as individuals, as members of a neighborhood, or as citizens of a country.