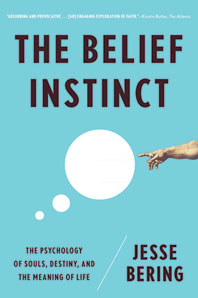 "A balanced and considered approach to this often inflammatory topic." —Nature

Lively and brilliantly argued, The Belief Instinct explains the psychology behind belief. Drawing on surprising new studies as well as on literature, philosophy, and even pop culture, The Belief Instinct will reward readers with an enlightened understanding of belief—as well as the tools to break free of it.

“Witty . . . . [Bering] employs examples and analogies that make his arguments seem like common sense rather than the hard-earned scientific insights they really are.” — New Scientist

“[Bering] approaches these dicey subjects with a dazzlingly insightful reading of the empirical literature on human cognition and development, a sly sense of humor, and an obvious compassion for those who do not share his beliefs. He also has a lot of fun. Richard Dawkins and others have surveyed some of this terrain before, but few have done it as convincingly and enjoyably.” — American Library Association, Choice Reviews (Top 25 books of 2011)

“Bering's contribution to answering the question [of God] is worthy of consideration by any thinking person.” — The Scientist (Magazine of the Life Sciences)

“Voted one of the 11 Best Psychology Books of 2011.
Blending empirical evidence from seminal research with literary allusions and cultural critique, Bering examines the central tenets of spirituality, from life’s purpose to the notion of an afterlife, in a sociotheological context underlined by the rigor of a serious scientist.” — The Atlantic

“Jesse Bering is a brilliant young psychologist, a gifted storyteller, a careful reader of Jean-Paul Sartre, and a very funny man. And his first book, The Belief Instinct, is a triumph—a moving, provocative, and entertaining exploration of the human search for meaning.” — Paul Bloom, Professor of Psychology, Yale University, author of How Pleasure Works

“An interesting and pleasurable book to read, mainly because it throws up demanding challenges. It may never achieve the notoriety of The God Delusion but its fundamental approach took me from Professor Dawkins's cliché-ridden arguments into more original territory.” — The Catholic Herald