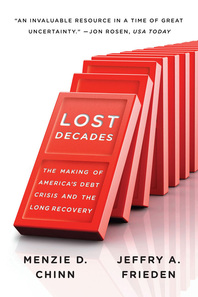 A clear, authoritative guide to the crisis of 2008, its continuing repercussions, and the needed reforms ahead.

The U.S. economy lost the first decade of the twenty-first century to an ill-conceived boom and subsequent bust. It is in danger of losing another decade to the stagnation of an incomplete recovery. How did this happen? Read this lucid explanation of the origins and long-term effects of the recent financial crisis, drawn in historical and comparative perspective by two leading political economists.

By 2008 the United States had become the biggest international borrower in world history, with more than two-thirds of its $6 trillion federal debt in foreign hands. The proportion of foreign loans to the size of the economy put the United States in league with Mexico, Indonesia, and other third-world debtor nations. The massive inflow of foreign funds financed the booms in housing prices and consumer spending that fueled the economy until the collapse of late 2008. This was the most serious international economic crisis since the Great Depression of the 1930s.

Menzie Chinn and Jeffry Frieden explain the political and economic roots of this crisis as well as its long-term effects. They explore the political strategies behind the Bush administration’s policy of funding massive deficits with foreign borrowing. They show that the crisis was foreseen by many and was avoidable through appropriate policy measures. They examine the continuing impact of our huge debt on the continuing slow recovery from the recession. Lost Decades will long be regarded as the standard account of the crisis and its aftermath.

"[An] important book, which deserves to be widely read and debated." — Publishers Weekly

"An invaluable resource in a time of great uncertainty. Intelligent yet accessible to non-experts, [it] fills a valuable niche in a debate often dominated by ideological talking heads who thrive on popular anger and drain the political system of sensible dialogue." — Jon Rosen, USA Today

"If you enjoy seeing the Gottmans as presenters, you will love their most recent book, 10 Principles for Doing Effective Couples Therapy. Extraordinary therapists and gifted researchers, it’s as if you can hear the authors’ voices emanate from the text. . . . [E]asy to read, while also providing useful concepts and a formula that works. . . . Of course, I recommend this book. It can be used as a resource guide, as well as one that offers immediate tools for working with clients. The research-based wisdom will no doubt become standardized knowledge because of how applicable it is for clinical work." — Simon Johnson, MIT, co-author of 13 Bankers

"[L]ike their previous books, 10 Principles attempts to break down a complex issue into something more tangible. . . . [T]he heart of this text focuses on well-crafted principles for effective therapy, and includes scientific research, assessments, exercises, and statistics. . . . Few things are more fascinating than when therapy and scientific research come together, which is precisely why any work produced by John or Julie Gottman makes for an interesting read." — Ernesto Zedillo, Director of the Yale Center for the Study of Globalization Former President of Mexico

"Known for their iconic research on couples, their prolific writings, and the development of a couples therapy informed by their research findings, Julie and John Gottman, in this well written and comprehensive book, gift their clinical wisdom and processes to couples therapists. Filled with clinical insight, coherent theory, case illustrations, various data gathering forms, and a treatment plan, this book should increase the competence and confidence of any clinician who is wise enough to read it." — Dani Rodrik, author of The Globalization Paradox

"In 10 principles, this book lays out in an eminently readable and accessible way the basic steps of effective couple therapy. It is a great contribution to the field and will guide numerous therapists onto the path of successful intervention." — Nouriel Roubini, Stern School of Business, NYU

Also By: Jeffry A. Frieden