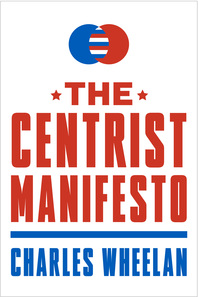 A vision—and detailed road map to power—for a new party that will champion America’s rational center.

From debt ceiling standoffs to single-digit Congress approval ratings, America’s political system has never been more polarized—or paralyzed—than it is today. As best-selling author and public policy expert Charles Wheelan writes, now is the time for a pragmatic Centrist party that will identify and embrace the best Democratic and Republican ideals, moving us forward on the most urgent issues for our nation.

Wheelan—who not only lectures on public policy but practices it as well (he ran unsuccessfully for Congress in 2009)—brings even more than his usual wit and clarity of vision to The Centrist Manifesto. He outlines a realistic ground game that could net at least five Centrist senators from New England, the Midwest, and elsewhere. With the power to deny a red or blue Senate majority, committed Centrists could take the first step toward giving voice and power to America’s largest, and most rational, voting bloc: the center.

"The Centrist Manifesto has helped me understand the root causes of political gridlock and why it has only gotten worse. The book also puts forth a bold new idea for how to change this." — Michael Porter, Fortune