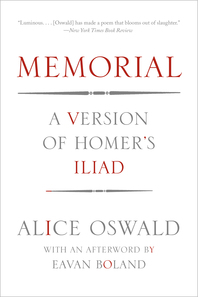 Territory Rights: Worldwide including Canada, but excluding the British Commonwealth and the European Union.

“The most remarkable and affecting book of poetry I encountered this year.”—James Wood, The New Yorker

In this daring new work, the poet Alice Oswald strips away the narrative of the Iliad—the anger of Achilles, the story of Helen—in favor of attending to its atmospheres: the extended similes that bring so much of the natural order into the poem and the corresponding litany of the war-dead, most of whom are little more than names but each of whom lives and dies unforgettably and unforgotten in the copious retrospect of Homer’s glance. The resulting poem is a war memorial and a profoundly responsive work that gives new voice to Homer’s level-voiced version of the world. Through a mix of narrative and musical repetition, the sequence becomes a meditation on the loss of human life.

“Luminous. . . . [Oswald] has made a poem that blooms out of slaughter.” — New York Times Book Review

“One of the best books of poetry I’ve read in years.” — Cleveland Plain Dealer

“Remembering on a grand scale . . . with a freshness to match Homer’s own—as if each soldier had died on the day of writing.” — Observer