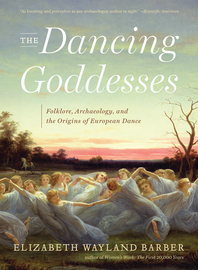 A fascinating exploration of an ancient system of beliefs and its links to the evolution of dance.

From Southern Greece to northern Russia, people living in agrarian communities have long believed in “dancing goddesses,” mystical female spirits who spend their nights and days dancing in the fields and forests. In The Dancing Goddesses, archaeologist, linguist, and lifelong folkdancer Elizabeth Wayland Barber follows the trail of these spirit maidens—long associated with fertility, marriage customs, and domestic pursuits—from their early appearance in traditional folktales and harvest rituals to their more recent incarnations in fairytales and present-day dance. Illustrated with photographs, maps, and line drawings, the result is a brilliantly original work that stands at the intersection of archaeology and folk traditions—at once a rich portrait of our rich agrarian ancestry and an enchanting reminder of the human need to dance.

"Years in the making, Barber’s far-roaming, gracefully interpretive, and sprightly study of European dance will be the go-to resource for many years to come." — Booklist (starred review)