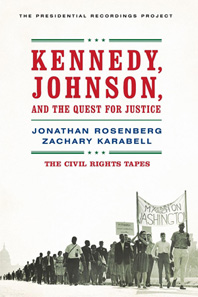 Peer inside the White House as Presidents Kennedy and Johnson grapple with racial injustice in America.

This remarkable book is composed of actual transcripts—most never before published—from the secret recordings that Presidents Kennedy and Johnson made of White House meetings and telephone conversations between the violent crisis in 1962, when James Meredith attempted to enroll at the all-white University of Mississippi, and the groundbreaking passage of the Civil Rights Act in 1964. Setting these transcripts within an historical narrative, Jonathan Rosenberg and Zachary Karabell present the story of America's struggle for racial equality during two tumultuous years.

Kennedy, Johnson, and the Quest for Justice brings the reader into the room as Kennedy argues with Mississippi governor Ross Barnett and the white business leaders of Birmingham, Alabama, and as Johnson makes late-night phone calls to Martin Luther King Jr., NAACP head Roy Wilkins, and Washington Post publisher Katherine Graham. As fly-on-the-wall history, this book gives us an unprecedented grasp of the way the White House affected civil rights history and consequently transformed America. Part of the Presidential Recordings Project, Miller Center of Public Affairs, University of Virginia, General Editors: Ernest May and Philip Zelikow.