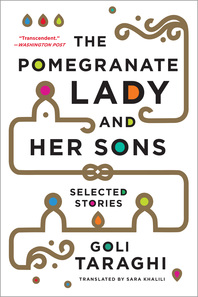 Rich in characters both whimsical and deeply poignant, humorous and real, the stories of Goli Taraghi have made her one of the world’s most beloved contemporary writers from Iran. Drawing on childhood experiences in the old-money neighbourhood of Shemiran in Tehran and, later, adult exile in Paris and return to Tehran after the Revolution, Taraghi captures universal experiences of love, loss, alienation and belonging—all with an irresistible sense of life’s absurdities.

In the title story, a woman travelling from Tehran to Paris helps an old woman—the Pomegranate Lady—find her way to her fugitive sons in Sweden. In "The Gentleman Thief", a new kind of polite, apologetic thief emerges from the wreckage of the Revolution. In "The Encounter", a woman’s world is upended when her former maid becomes her jailer.

"Carries the flavor of the old world..." — The Washington Post