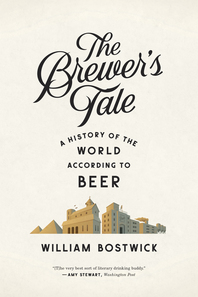 Taste 5,000 years of brewing history as a time-travelling home-brewer rediscovers and re-creates the great beers of the past.

The Brewer’s Tale is for anyone who, drinking a beer, has wondered how the past tasted. Part travelogue, part history, part culinary adventure, beer critic William Bostwick uncovers the stories behind the brewers who have practised their craft since the dawn of civilisation. Beer by beer Bostwick tells a history of the world through the brewer’s eyes, unearthing recipes from poems and potsherds to re-create these beers and their long-lost flavours. Jumping through time as he weaves ancient lore with today’s craft scene, Bostwick meets adventurous brewers who share his path, trading insight, recipes and ingredients like home-grown hops and wild, Nile Delta yeast. The Brewer’s Tale is history told in the glass, from tongue-numbing mead to sour pediococcus-laced lambic.

"William Bostwick's joyous pub crawl through time is a total delight. It fizzes and pops through the gloop of ancient Babylon up to the present day..." — The Independent