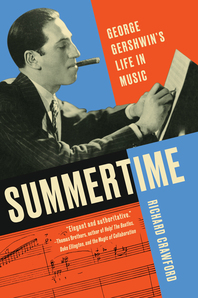 The life of a beloved American composer reflected through his music, writings and letters.

George Gershwin blossomed as an accompanist before his talent as a songwriter opened the way to Broadway where he fashioned his own brand of American music. He composed a run of musical comedies, with his brother Ira as lyricist, and several classical works while he became a favoured guest in New York social circles. His 1924 Rhapsody in Blue was an instant classic rooted in in his absorption of African American music. A decade later came Porgy and Bess, his magnum opus. The brothers left New York to write songs for Hollywood—but their work was cut short when George developed a brain tumour and died at thirty-eight.

"The author offers many such evocative descriptions in his scholarly account of Gershwin’s tragically short life. The works are covered in exhaustive detail, with in-depth analysis, plots and character summaries…" — The Economist

"Summertime is a genial and enthusiastic book..." — Times Literary Supplement