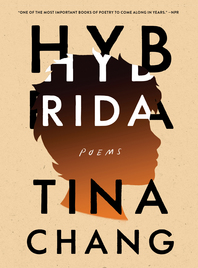 A stirring and confident examination of mixed-race identity, violence and history skillfully rendered through the lens of motherhood.

In this timely, assured collection, Tina Chang confronts the complexities of raising a mixed-race child during an era of political upheaval in the United States. She ruminates on the relationship between her son’s blackness and his safety, exploring the dangers of childhood in a post–Trayvon Martin era and invoking racialised roles in fairy tales. Against the stark urban landscapes of threat and surveillance, Chang returns to the language of mothers.

Meditating on the lives of Michael Brown, Leiby Kletzky and Noemi Álvarez Quillay—lost at the hands of individuals entrusted to protect them—Chang creates hybrid poetic forms that mirror her investigation of racial tensions. Through an agile blend of zuihitsu, ghazal, prose poems, mosaic poems and lyric essays, Hybrida envisions a childhood of mixed race as one that is complex, emotionally wrought and often vulnerable. Hybrida is a twenty-first-century tale that is equal parts a mother’s love and her fury, an ambitious and revelatory exploration of identity that establishes Tina Chang as one of the most vital voices of her generation.

"Tina Chang's piercing is a breakthrough book...The poet's eloquence meets a mother's ferocity channeling the experience of parenting mixed-race black children in the current cultural climate... She tears apart categories that would define her kids into harm and she rages with a power that will have readers weeping and shouting." — Brenda Shaughnessy, O Magazine