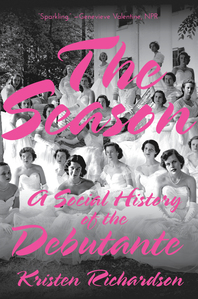 “...Kristen Richardson’s sharp account of how the season evolved... is a more absorbing story than any period drama.”—Financial Times

From Georgian England and Edith Wharton’s New York to the contemporary International Debutante Ball, the presentation of young women into society has persisted. In this “sharply observed” (The New Yorker) exploration of the debutante ritual, Kristen Richardson uncovers its extensive cultural influence in Britain and the United States, how daughters in these countries have come to marry, and the ritual’s spread around the world—reaching France, Russia and China. The Season gives voice to an array of complex feelings about being put on display, and about what these women’s futures in society might be.

"Richardson has made a valiant effort to unearth some worthwhile social commentary. To this end, she presents a detailed examination of modern debutante societies... [Her] engaging study deserves credit for its persistently humane treatment of her subjects..." — The Telegraph

"... Kristen Richardson’s sharp account of how the season evolved from its early days after the Protestant Reformation in England, through its conquest of a newly independent America, to its leap into Russia and China, is a more absorbing story than any period drama." — Financial Times

"Step into colonial Philadelphia and Jane Austen’s England, America’s Antebellum South and Mrs Astor’s parties, and learn how some of the young women felt about being put on display." — On the Bookshelf, Choice