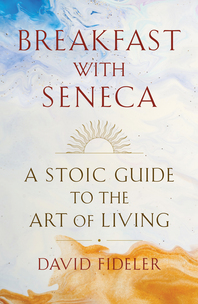 The first clear and faithful guide to the timeless, practical teachings of the Stoic philosopher Seneca

Stoicism, the most influential philosophy of the Roman Empire, offers refreshingly modern ways to strengthen our inner character in the face of an unpredictable world. Widely recognised as the most talented and humane writer of the Stoic tradition, Seneca teaches us to live with freedom and purpose. His most enduring work, over a hundred “Letters from a Stoic” written to a close friend, explains how to handle adversity; overcome grief, anxiety and anger; transform setbacks into opportunities for growth and recognise the true nature of friendship. In Breakfast with Seneca, philosopher David Fideler mines Seneca’s classic works in a series of focused chapters, clearly explaining Seneca’s ideas without oversimplifying them. Best enjoyed as a daily ritual, like an energising cup of coffee, Seneca’s wisdom provides us with a steady stream of time-tested advice about the human condition—which, as it turns out, hasn’t changed much over the past two thousand years.

"Reading Breakfast with Seneca is like sitting down for a good cup of coffee with a wise and compassionate friend." — Eric Weiner, author of The Socrates Express

"This book is the perfect antidote to the commercialism and superficial values of modern times. [Fideler] channels Seneca without distortion and makes him accessible to the twenty-first-century reader." — Robin Waterfield, translator of Marcus Aurelius and Epictetus

"[A] great introduction to both Seneca and Stoicism and will even help those already familiar with these writings to gain more benefit from them." — Donald Robertson, author of How to Think Like a Roman Emperor

"The most companionable of the new Stoic books." — Molly Young, The New York Times