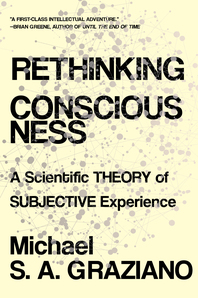 The celebrated scientist talks attention, awareness, and the reception to his work in Prospect

What happens if your mind lives for ever on the internet?

Michael Graziano in The Guardian

Neuroscientist and psychologist Michael Graziano puts forward a ground-breaking new theory of the origin of consciousness.

Tracing evolution over millions of years, Michael Graziano shows how neurons first allowed animals to develop simple forms of attention: taking in messages from the environment, prioritising them and responding as necessary. Then covert attention evolved—a roving, mental focus separate from where the senses are pointed. To monitor and control covert attention, Graziano posits in his attention schema theory, the brain evolved a simplified model of it—a cartoonish self-description depicting an internal essence with a capacity for knowledge and experience. In other words, consciousness. That self model gives us our intuitions about consciousness and makes us empathetic social beings as we attribute it to others. The theory implies that uploading the data structure of consciousness into machines will be possible and he discusses what artificial consciousness will mean for our evolutionary future.