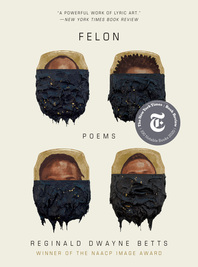 In fierce, agile poems, Felon tells the story of the effects of incarceration—canvassing a wide range of emotions and experiences through homelessness, underemployment, love, drug abuse, domestic violence, fatherhood and grace—and, in doing so, creates a travelogue for an imagined life. Reginald Dwayne Betts confronts the funk of post-incarceration existence in traditional and newfound forms, from revolutionary found poems created by redacting court documents to the astonishing crown of sonnets that serves as the volume’s radiant conclusion.

"Searing... [Bett's] critique, having largely to do with the criminalization of poverty, charges these poems and flows through them, energizing their lyric force... This is a powerful work of lyric art. It is also a tour de force indictment of the carceral industrial state." — Carolyn Forché, The New York Times Book Review

"[Felon] pushes Betts's story forward, in verse that is nimble in its diction, tone and focus. The poems are about returning to everyday American life, but in an estranged and often painful way, as if blood were rushing into a long-pinned limb." — Dwight Garner, The New York Times

"[Felon] shows how poems can be enlisted to radically disrupt narrative... Betts's poems about fatherhood [are] some of the most powerful I've read... The black bars of redacted text [in the redaction poems], which usually suggest narrative withheld, here reveal its true contours... For Betts, the way to expression passes through such troubled silences." — Dan Chiasson, The New Yorker